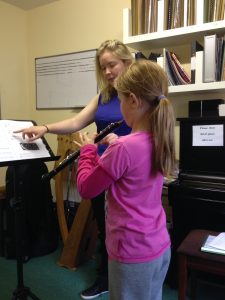 [From IAYO.ie. Using technology to bring about a better world has many facets. This is the first in a series of articles from IAYO on a project aiming to stimulate the use of internet teaching for the development of youth orchestras in areas with low population densities. Whilst many people now learn to play an instrument online through lessons and video tutorials, the technical aspects of learning an instrument to perform in classical music mean internet-only methods are not suitable for younger players.]

This October saw the beginning of a project that has been on the IAYO long-finger list for quite some time now. Around five years ago, discussing the lack of oboe teachers in Ireland with Eimear Saunders whilst on an IAYO Chamber Music course, we thought it would be great if we could use the internet to enable students all over the country to learn the instrument without having to travel every week to Dublin or Cork. The reverse direction, with teachers travelling from Dublin or Cork around the country, was just not viable without lots of students.

We developed the idea that two or more orchestras in reasonably close proximity to each other might both start a scheme with a number of students each and the oboe teacher could travel for ‘bootcamp’ days every four to six weeks whilst teaching over the internet in the meantime.

It hasn’t quite turned out that way for various reasons outlined below but we are very happy to say that a mixed model of teaching is now being developed in Carlow and Laois as a collaboration between IAYO, Music Generation Carlow, the Carlow College of Music, Music Generation Laois and the Laois School of Music.

For IAYO, the idea is of interest because many orchestras have access to lots of flute players and often clarinets but no oboes or bassoons. Bassoons, given their high cost, are another problem altogether but if a system, or systems, could be developed allowing young people to learn ‘rare-breed’ instruments away from the main population centres, then the possibilities for orchestras in developing their balance would be really improved, opening up new repertoire and possibilities.

Our first problem in starting was to get enough instruments together to make the project feasible. We had a great boost to this in 2014 when the Richardson-Smith Musical Trust made a grant to IAYO for violas and junior oboes. We bought four oboes from that grant and added another two this year with assistance from the Music Capital Scheme run by Music Network. Having six instruments, we thought we were ready to start and went looking for collaboration. The Carlow College of Music and Laois School of Music had both expressed an interest and were well placed for a pilot project as they are fairly close together and the broadband infrastructure in the Midlands is now up to the job of carrying video-calls reliably.

Our second problem was that we knew that this teaching model was ultimately going to end up costing more than ‘normal’ instrumental tuition as we had decided that the involvement of a local wind teacher would be necessary as younger players, especially beginners, would not do well with so little in-person contact. Initially, we thought that the local teacher might just do a supervised practice with the students on a weekly / fortnightly basis to complement and reinforce the online teaching by the oboe teacher. However, in our search for a way of making this happen, we ended up with more than we bargained for in the absolute best sense of the word. Along with the school and college of music, we approached Music Generation in Carlow and Laois to see if they would be interested in getting involved with the project and helping to support the extra costs involved. We were delighted that both said, “yes”, and also delighted to find that Music Generation in Laois were also in possession of another three brand new oboes that were awaiting the opportunity to find players and our proposal was of great help to them also.

So, since October we have been preparing the groundwork and have got under way in both counties, recruiting students and having in-person lessons with Eimear on a weekly basis as they get to know the basics. Also, a woodwind teacher in each county is also learning to play the oboe so that they can feel confident to supervise the students musically whilst being aware of technique. Reeds were something that I hadn’t counted on being an issue but, of course, for double reed instruments, it is so important and something that may yet prove a difficulty as we progress to the mixed-teaching phase of the pilot. Fortunately, however, Eimear is also a reed manufacturer and makes sure that each student has a functioning reed and a functioning spare in their case when she meets them. At worst, she can make up reeds in between lessons and send them by post if necessary. We have now planned that students will be on a three-week rotation with: Week One: a lesson with Eimear, possibly a long lesson or an individual and group lesson in order to get the most from Eimear’s travel time; Week Two: a lesson over the internet with Eimear in the student’s home and; Week Three: a lesson / supervised practice with the local wind teacher.

As part of the process, we have added a new section to our child protection policy with assistance from the National Youth Council of Ireland. In theory, there are all sorts of potential complications arising out of teaching over the internet from a child welfare perspective and lots of things to be specific about. We will be making this policy available on our website and copies can also be had by contacting the IAYO office.

As we are preparing this Newsnotes, we have just had the first online lessons – dealing with the attendant complications like the fact that the Skype recorder doesn’t work as expected and we have to work out a system for making sure that the recordings are kept securely for records and not distributed via the internet. However, the problems also bring ideas for potential for enhancing how the teaching works. There are already plenty of tutorials for learning instruments and teaching and masterclasses available online but they are not really suitable for teaching beginners, especially on instruments such as the oboe where reeds are so important and really need the teacher engaged in the real world. However, the idea that students can also record their lessons and view them back between-times is something that could prove very useful (as long as they don’t go posting them on YouTube without the teacher’s permission :-)). The potential for the teacher to record themselves doing technical exercises and posting them for their students is also something that could prove very useful also. It is not in question that not meeting the teacher in real life on a weekly basis might cause difficulties for the young student but the technology also provides advantages to help balance the score (pun intended).

There are already plans for an oboe quintet as part of the Laois School of Music Christmas Concert and the new young players are to be included in a commission by Elaine Agnew for the Laois Youth Orchestra to be performed next year.

We did start out with a Plan B for this programme – just in case – but right now it looks as if it is going to be a real success and we may have a model that works for young beginning students to learn the rare-breeds regardless of where they live in the country. We’ll keep you updated as we go.