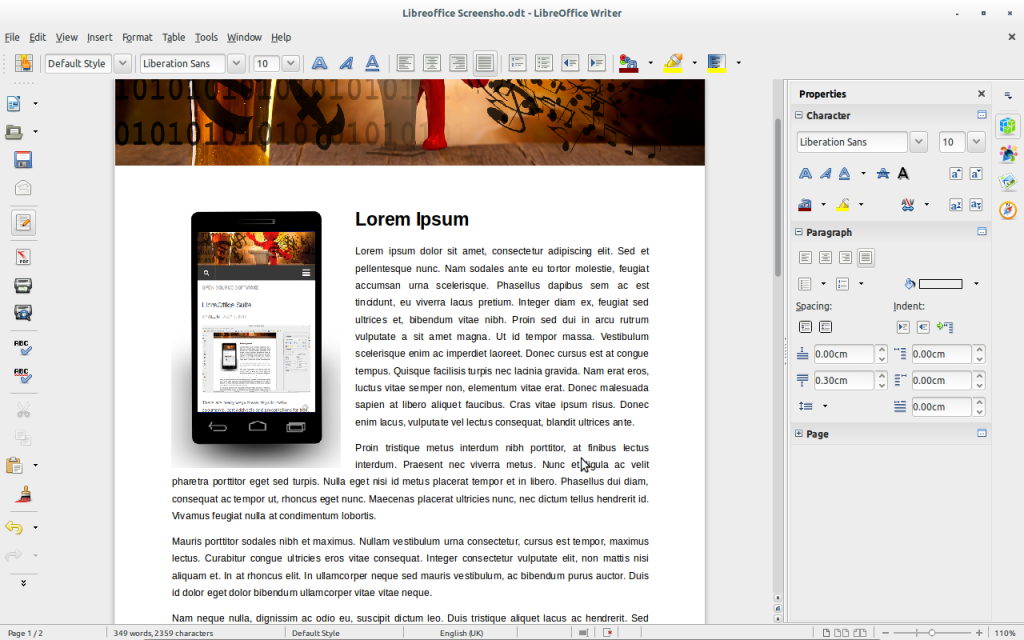 There are many ways these days to make documents, spreadsheets and presentations for free, particularly if you have good broadband. You can use Google Drive, Outlook and many others online with free personal accounts: these are good enough if you want all your documents online and have light requirements for formatting, indexing etc. However, I often find that they just don’t do as much as I want; particularly in longer documents where I want to be able to have control over spacing, placement of page numbers, indexing etc.

Introducing LibreOffice. Quite simply, it is an office suite consisting of a word processor, spreadsheet, presentation, drawing, database and maths formula applications. I began using OpenOffice in 2003 on switching from Mac to PC. Having been used to the foibles of OS9 and earlier, I didn’t really have much expectation of computers and was at the dawn of my current phase of, “Why pay for buggy and inadequate software when you can get buggy and inadequate software for free?” Which is really to say that I have found OpenOffice and LibreOffice every bit as stable as their proprietary counterparts. I find the experience of finding something wrong in a piece of Open Source software, and reporting it so it can be fixed, so much more satisfying than finding a bug in a piece of paid software – which I often do.

Probably the best and worst thing about LibreOffice, in my view, is the interface. Particularly on Windows, it really could do with a makeover as it looks like something that was svelte and fancy back around 1999. That being said, it retains the menu system, which is really the best way, for me, of laying out both regularly used and more esoteric and advanced options in a way that can be easily found. I am not a fan of ‘ribbon-style’ computing.

Feature-wise, LibreOffice is not an exact equivalent of MS Office. There are a few things that Office has that are not present in LibreOffice or that don’t work in the way you expect and, if you’re used to Office, there can be some relearning involved. On the other side of the fence, LibreOffice has some very excellent tools that Office doesn’t. One tool that I regularly use in LibreOffice is the ability to do maths in tables in a word processing document, treating them like a simple spreadsheet applying, for instance, currency formatting etc. For simple budgets that go into plans and proposals, this is much easier than making a separate spreadsheet and importing it … and then reimporting it and matching the format again if I want to make small changes. It’s a very clear, ‘Why isn’t that feature available?’ question for Office.

For those of you that create long documents with multiple sections, headings, tables, indexes etc., LibreOffice is superior in its central control over all the elements of documents. The ability to set global styles for these elements is stronger and far more accessible than in Office. While Office can manage most of these things, getting it to behave well is a difficult process that, having been a regular user of LibreOffice for years, is simply annoying. (Update in 2016: Designing with LibreOffice by Bruce Byfield is now available to help you get the most out of the suite. Get it at designingwithlibreoffice.com.)

Compatibility of document formats has always been a problem for anyone other than Microsoft in the office sphere given that theirs have been the de facto standards for a long time now. .doc, .xls and .ppt all work well enough in the free office suites and their own translations of these work well enough back into office but the arrival of the .docx etc. has created interpolability problems between the free and paid office suites (some would say this problem is quite deliberate). LibreOffice does a very good job of importing the new Microsoft formats and will save well in them also although there are still occasional glitches. The native format for LibreOffice, Open Document Format (ODF), is now well supported by Office so problems in this respect are very few these days. These final issues may disappear completely in the future if other governments follow the lead of the U.K., which has made ODF the default format for all government documents on the basis that people should not have to pay for software in order to be able to access official documents online.

Most of what I say here about LibreOffice also goes for the Apache OpenOffice suite. There was a disagreement a few years back that led to a split, or ‘fork’ in the software and they have become somewhat different since then. It seems that LibreOffice is in the ascendency right now and it generally gets the better reviews. The pace of development for LibreOffice is also much faster. Hopefully, they may forget their differences at some future point and unfork for the good of all.

LibreOffice (and OpenOffice.org before it) have been my choice of office suite for 12 years now and, even though I have MS Office, the latter is never my preference. It costs nothing to download and works on all desktop operating systems and iOS with development underway for Android and a fully-featured browser-based cloud version. Get it at libreoffice.org.