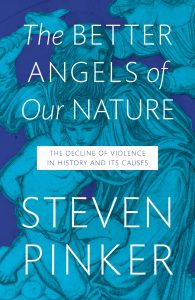 On 16 December 2014, seven gunmen affiliated with the Tehrik-i-Taliban conducted a terrorist attack on the Army Public School in the north-western Pakistani city of Peshawar killing 145 people, including 132 schoolchildren. I finally needed to go look for an answer to a question that I had had for many years:  “Is violence in our society and our world getting worse?”

I Googled ‘Is violence increasing’ and I found The Better Angels of Our Nature almost straight away. The answer to the first part of my question is a definite, ‘No!’ Even accounting for the fact that statistics in relation to times past can mostly only be estimates, the difference in the numbers is so compelling – orders of magnitude – that it clearly presents our bloody and genocidal 20th Century, when taken in context of world population, to be the most peaceful in history with the lowest body-count of violent death per head of population ever. What we are now living in is referred to by historians as the ‘Long Peace’, a period that has seen less major and less destructive conflict than any time previously.

So, why does it all seem so bad? One reason is that our modern terrorist and insurgent organisations around the world have adopted highly effective corporate branding strategies. Want to get in the world news day after day? Behead people! Good production values! Not stylised, but designed to get the maximum horror from the people that see the images and videos and, more importantly, all those people who never see the videos but hear about how awful they are.

Another reason is that of any sort of violence is now instantly reportable around the globe. We got to watch 9/11 live on TV as the buildings burned and people jumped. We had a view from outside the Westgate Mall in Nairobi as well CCTV footage coming from inside the centre. We get to watch the nose-eye view of a Tomahawk missile travelling down a street and turning left at the junction in order to reach its target. We hear of every incident that becomes public, not just once but when it happens; when the perpetrator is arrested; when they’re charged; when it comes to court; when they’re convicted; and even when they’re released.

The Better Angels of our Nature is a book in two parts. The first part gives an historical account of rates of violent death and war. The author is very up-front about the reliability of the statistics presented. He makes a very good case that, even if his facts are very inaccurate, the thesis still holds. The second part of the book examines possible reasons as to why we have become more civilised. It involves plenty of psychological experiments, MRI scanners and the like and I started into it reluctantly: reading about the science of flashing lights inside the brain is not usually my area of deepest interest. However, again, the case is very solid; again, he acknowledges the limits of his own and general scientific knowledge in the area.

It’s not a bad thing that we have become more intolerant of violence. It’s a really good thing. It’s great that we can hear of people involved in wars in faraway countries and feel a human sympathy for them rather than just ‘those people over there always killing each other’. It’s great that our governments react to atrocities in far-away lands with clear condemnation and act with tools of economics and even tools of war when needed. But perspective needs to be kept. There is plenty wrong with the world but it’s not gone to hell: not yet at least!

Part of the cause of the decline is the development of the understanding and actions of pursuing mutual self-interest. You’re far better off trading with your neighbour than you are invading, subjugating and stealing from them. The pitfalls are smaller and easier to manage. I’m not an advocate of greed but if it’s tempered in the right direction, I’ll put up with it.

Whether you believe me or not, don’t take my word for it. Take Steven Pinker’s. The Better Angels of Our Nature: available in hard- and soft-copy as per your preference.