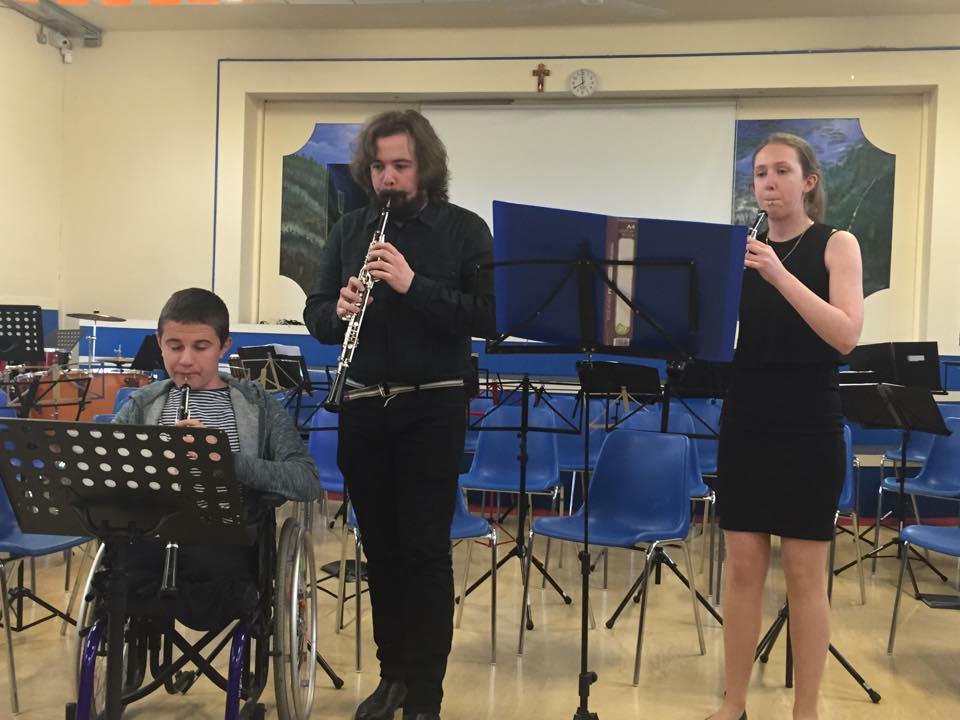 Having reached the end of the first year (seven months really) of our oboe teaching project in Carlow and Laois, we have been chatting to some of those involved to find out how it has been working and if we should continue in the same way or try to rearrange for better results. Thankfully and most happily, the teaching has been a great success and, with the exception of a few internet connectivity issues, everything has gone really well.

Firstly, we checked in with Bill McGrath, who has been both learning and teaching the oboe since October, in the unusual relationship of sharing students with his own instrument teacher, observing lessons and also taking lessons by Skype so as to keep ahead of the young ones. Bill is, himself, a former member of the Carlow Youth Orchestra and now works as a composer and teacher based in Carlow. He graduated from the RIAM in 2012 with a BA in Composition along with studies in conducting and piano. His postgraduate studies were undertaken at the University of York, where he worked under Jonathan Eato, as well as Roger Marsh, Thomas Simaku and Ambrose Field. In his time at York, Bill became involved with the University’s Chimera Ensemble.

Bill’s Skype lessons worked very well. There was a lot of work done in them – even more than in-person lessons. There was no ‘arriving in the room and setup’ time as both he and Eimear were ready to go at the appointed time and there were no distractions during the lesson. The work on Skype was very focussed. There was no problem with not being physically present. In terms of working on embouchure, the teacher can’t tell what is going on inside the student’s mouth in any case so there was no difference. Bill doesn’t see Skype working as the sole method of contact for lessons. He feels that an in-person lesson once every four weeks would be a good amount for his own learning.

Given that this was first-time-out for a project like this for IAYO, the schools of music and the Music Generations, we had started the students and teachers learning at the same time. Bill found this has worked out fine but thinks that a six-month head start for the teacher might be useful.

In addition to learning the instrument himself, Bill also observed lessons with the younger students and so, was familiar with the work that they were doing with Eimear and able to dovetail well. For young students, he worked a lot on counting and securing the music – not quite basic musicianship but helping them to build their musicality with the instrument. There was plenty of work to be done with the older students on interpretation so non-technique focussed lessons worked very well with everyone.

Finally, as a little spin-off benefit, Bill intends to find or make opportunities to perform with the oboe in ensembles so it’s good for adult music-making too.

Having talked to Bill about his experience as both student and teacher, we checked back in with Eimear Saunders, the lead-teacher for the project. Eimear feels that the mixed combination of lesson-types is working really well. “Given that many students progress at different rates, it is hard to say if they were, generally, doing particularly better or worse in their progress under this model. The rates of progress were in the ‘normal’, very-wide range.”

Eimear was surprised at the success of the Skype lessons. The only drawback, from her point of view, was ‘not being able to fiddle with reeds’ (Eimear is a reed maker and we have made sure that students have a plentiful supply so it’s not that big a problem). Teaching embouchure is not a problem for Eimear. She mainly works on sound with her students and making the right shape will make the right sounds. In any case, she encourages students to play with the mouth shape and find their own sound: phrases such as, “can you hear the difference”, “blow harder”. Finger position on the oboe is not so important as it might be for other instruments, such as violin, so the need for arranging students’ fingers on the instrument was not a problem. For someone learning the oboe as a second wind instrument, the oboe is nearer to clarinet or sax than the flute or brass instruments from an embouchure point of view, but it is, nevertheless, not a great difficulty. There were occasional technical difficulties with Skype: one student in particular had a few lessons interrupted. However, for the most part, the lessons were more productive than being there in person. Four half-hour lessons in a row on a Saturday was enough to leave Eimear needing the rest of the day off – quite intense. The intensity of the lessons and progress made more than made up for technical difficulties that were encountered and, perhaps, lessons could be a bit shorter on Skype for younger players.

The teaching has mostly run on a three-week rota: Eimear in person with the local teacher observing; local teacher on their own with the student; Eimear over Skype. Eimear feels a four-week rota with herself actually present once every four weeks would work very well, two weeks of the student and local teacher alternated with herself on Skype in between. She feels that with the progress of the local teacher and student, she could very quickly move to a role of ‘technical consultant’ with the local teacher taking the lead role as the younger students’ main teacher. As part of preparations for the Carlow College of Music’s summer concert, Bill had composed and arranged music for himself and his oboe students and taken the lead in working on the music with them. Eimear’s in-person and Skype lessons can, she feels, become more of a regular ‘masterclass’ in the instrument rather than her directing and monitoring the progress of the young students.

All-in-all, the project thus far has been a great success and we intend to keep it going in Carlow and Laois as well as trying to connect teachers, instruments and young people around the country. Two oboes have already joined the orchestra in Laois alongside brass players from one of the Music Generation projects so we expect to hear great new things from there. The young oboe players in Carlow will also be taking part in the orchestra there from next term.

As for the students, we’ll let them speak for themselves.

My name is David Vesey and I recently took part in a highly innovative programme where I learned to play the oboe. I found the lessons great. Eimear was an excellent and supportive teacher. The Skype lessons where a new experience for me and I was wondering how well they would work. As a trad musician as well as a classical musician, I have experience of learning by ear. This certainly aided in the Skype lessons. I can see the potential of internet learning in spreading music to people who couldn’t access it before. However, the quality, of both sound and picture, needs to be high to make it successful. At times the internet quality took away from the learning experience but overall I feel the Skype lessons were a success.

Ellen Mc Hugh: I began learning the oboe in September 2015 as part of IAYO, Carlow College of Music & Music Generation’s oboe project. I was quite daunted by the challenge of learning a new instrument, but greatly looking forward to it – I had been interested in learning the oboe even before I had heard about the project, as it is such a beautiful instrument.

The oboe is a very challenging, but very rewarding, instrument to play: it can be difficult to get a nice, even sound, but there is a great sense of achievement when you do! I am really enjoying the mix of pieces that I am learning, especially the “Queen of the Night” aria. Again, this is a challenging piece because it is quite long, but a very enjoyable and rewarding piece to play! Overall, taking part in the oboe project has been a fantastic experience and I would love to
continue with it.